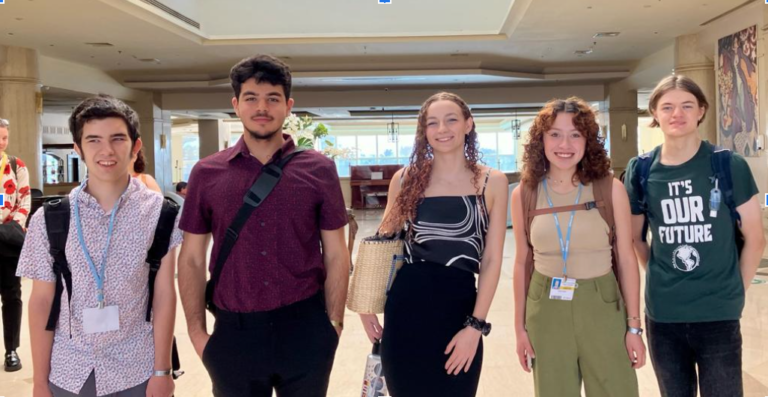 For those that attended the livestream, I confess that this dispatch is very similar to what I presented. The reasons for this include 1) this really is a good summary of my main takeaways from the week and 2) I’m way too tired to write something original right now. Complaints? Email me at .

A couple months ago, another local activist asked me about my theory of change. A lot of ideas ran through my head at that moment, but I didn’t have an answer formulated. At COP27, I think I’ve come to understand a fair few things about change–how it works best, how we work together, and how I can best be a part of the progress that matters.

The first–and perhaps most unsurprising–thing that I experienced at this conference is the insufficiency of global bureaucracy. In addition to the tedious processes that are inevitable in any large (especially worldwide) governing body, I saw firsthand how even the highest levels of global politics involve dealing with People (™). And People, it turns out, are sometimes difficult. One of the meetings I attended–supposedly on National Adaptation Plans–amounted only to 50 minutes of trying to get everyone looking at the same document and 10 minutes of various countries saying “let’s not do that again.” 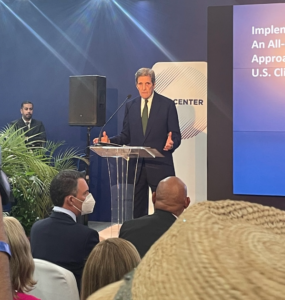 But beyond even this kind of frustrating but mundane dysfunction, global bureaucracy also means dealing with the political excesses of wealthy countries, the outsized influence of multinational corporations, and the structures that have stalled effective change for parties with less power. There’s a certain degree of justified cynicism to be felt here. We can say with some certainty that deals are being made in Sharm behind closed doors to increase fossil fuel production in light of the current energy crisis. The venue is in the middle of a resort town that relies economically on air travel and swimming pools in a desert. The conference itself–The UN Framework Convention on Climate Change–is sponsored by Coca-Cola, the largest single plastics polluter in the world. Nothing radicalizes an impressionable teen faster than that.

The second major theme of COP for me was the sheer broadness of the climate crisis: how it impacts us, how we impact it, and how the ways we impact it impact us. (That sentence is grammatically correct. Come at me.) It’s no surprise given the sheer amount of time I spent walking around, finding sessions to poke my head into, soaking up all the information I could. Barbados PM Mia Mottley’s presentation emphasized just how many impacts of climate change are felt in every facet of our lives and of lives around the globe; see Tori’s excellent dispatch for more detail. Sessions like the opening of the Africa pavilion, where the presidents of Botswana and Zimbabwe spoke on their preparedness for investment in solutions, showed just how much humanity can do and is doing in this existential battle. Even then, a side event on indigenous rights in business-driven climate action sobered the room to the continued reality of extractive colonialism in the green energy transition.

These first two themes bring me to my third: the role of small-scale, community-based action. Through the inefficiency of global bureaucracy and the universally-pervasive nature of the climate crisis, climate action, and climate justice, each and every community in the world has both potential and responsibility to act. From the Climate Justice Alliance, a coalition of dozens of local groups dedicated to rejecting corporate narratives and inviting the voices of the marginalized, to Tongabove, an architecture project that will keep Tongan islands livable as sea levels rise. 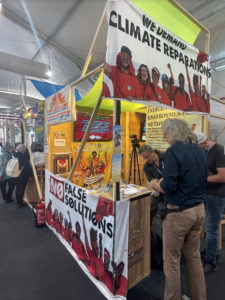 The most meaningful experiences I had this week tended to happen at indigenous-operated pavilions and booths like this one.

It’s no mistake that these solutions are representative of indigenous communities; they exist outside the bounds of global industrialization and the multinational corporations that sponsor this COP. It’s unsurprising, then, that they would originate from the people that have been stewards of the land and water the longest. I strongly encourage everyone in the climate movement to seek out indigenous voices as some of the most trustworthy experts in this field–as people, all of us, we all have the same at stake here. Listen to those who have the same interests before you believe corporate greenwashing and false solutions.

I want to tie it all together with this very mundane picture of COP attendees walking between buildings. 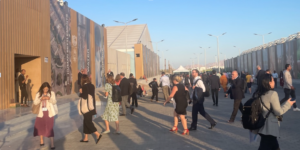 Everyone in this image has… an idea. Probably several. Some of them are similar, some are very different. But once again, every single part of our lives and every single part of our futures is affected by the global reality of climate change. That means that all these ideas, of everyone in the picture and every one of the 30,000 attendees to this conference, are where we get the kind of change we need.

Some are global leaders who negotiate at the highest levels of global politics. Slowly. Their ideas enter the plenary rooms and face down the world; they have to contend with the interests of every other country in addition to balancing the interests of their own constituencies. Still, they can achieve the kind of singular, large-scale change we need, and I hope that this COP will result in that.

But far more of those 30,000 are people like us–NGOs, businesses, activists, and people who believe in our future. Though we don’t yet have access to the kind of power that high-level delegates hold, we don’t all need it. We have ideas too. They range from school-district level work in Evanston, Oak Park and Chicago to projects like Tongabove. We work at a community level, on a personal level, with stakeholders and people in power. Rather than facing down the world, we need only to work with the people around us. We can affect the kind of rapid change we need–on this small scale.

But we know we need progress on a massive scale. Part of that really is the tedious, crucial work of global bureaucracy. Yet what I’ve come to understand here is that those of us who can work on these community-based projects are the integral part of the global change that’s needed. Every single idea in this picture, at this conference, and in the minds of the people reading this has potential to affect our communities. When even a small portion of these many, many small-scale projects succeed, we find the global, rapid, community-based progress that climate justice requires.

Change is hard. Change is slow, no matter what scale it occurs at. Change takes a lot of people doing the right thing in the face of more powerful people trying to stop them at every step. But change is also personal. It comes from a close understanding of each other, of the world we live in, and of what matters. It relies on valuing the interests of real people and stewarding the Earth we’ve been given to the best of our abilities. From the halls of global bureaucracy to a community garden, we must all be a part of it.