Between the sandy mountains of the Sinai Peninsula and the Red Sea, a new, golden sunrise reaches out to welcome 30,000 people to the second day of the United Nations Climate Change Conference in Sharm El Sheik, Egypt. Only 24 hours after its official commencement, COP27 set off with revitalized passion and tremendous energy as more attending nations, like the United States, opened their pavilions and shared their knowledge on climate with the rest of the world.

As veteran pavilion delegates, panels, and speakers addressed global challenges and successes in climate change and SDG goals, novel pavilions have used the spotlight of COP27’s earliest days to bring their own representatives and voices to the forefront of climate discussions. Today, delegates from the Children & Youth and Indigenous Peoples Pavilions all gained new access to international conversations about global warming, disaster relief, and sustainable development by having internationally recognized seats at COP27’s table.

Placing a strong emphasis on the voices of underserved communities fighting for climate resistance in developing countries, global leaders at COP27 have made a clear commitment to respond to climate disasters and other obstacles that are disproportionately affecting Island Nations, African Nations, Indigenous Nations, and The Global South. In our experience over the past two days as IOF’s youth delegates, it seems that global leaders have shared a unified vision for collaboration around these topics.

Most perspectives, like those we encountered today in a momentous speech by the Prime Minister of Barbados, Mia Mottley, highlight the urgency of building climate resistance and expanding disaster aid to protect the most vulnerable and underserved communities that are being devastated by climate change. Her excellency’s inspirational insight taught us that the central issue putting nations like Barbados at risk is their lack of a climate change “buffer”. Mottley’s term, “climate change buffer”, describes the ability of nations like the United States, China, and the United Kingdom to bounce back from disasters fairly easily and with minimal support due to their incredible resources. However, without a comparable safety net for developing countries, vulnerable nations facing the immediate effects of climate change continue to suffer despite having contributed very little to global emissions.

The overwhelming and systematic lack of reconstructive funds, resources, aid, and investment that the world bank and other financial systems have contributed to, are being criticized heavily as countries prepare for finance talks on Day 3. What essentially makes it so difficult to acquire adequate funding for African and Island Nations are continued inequalities in banking, inequalities in investments, and inequalities in the distribution of existing funds.

As other pavilions have mentioned during the conference, disproportionate amounts of green energy, sustainable development, and climate research funding have been awarded to nations that already have the capacity to independently fund their transition away from fossil fuels rather than nations that struggle to even develop widespread access basic necessities like electricity, healthcare, and food.

As she described when referencing western nations’ “culture of contentment”, continued complacency around climate resistance funding creates additional barriers for developing nations seeking climate investments. Mottley was strongly passionate about the impact of knowledge and education surrounding climate accountability so that as a planet, we can approach nations that have contributed the most to global warming about financing their fair share of loss and damage funding for the vulnerable nations they have put at risk. Barbados’s fundamental call to action was on World banking reform, stating that funds for climate resistance development need to become more investment-focused rather than profit-driven to give nations like Barbados the security that large, developed nations enjoy. 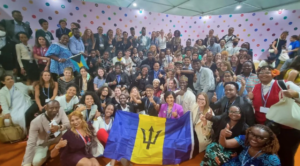 These conversations about climate disasters and relief funding are even more critical considering the extreme consequences of recent climate disasters and their rapidly increasing frequency. Last night alone, while COP27 slept, The Dominican Republic faced heavy rains that resulted in the deaths of at least six people. It is an uncomfortable but undeniable truth that climate relief and reconstruction will become one of the top priorities of this year’s conference because of its ties to human life, suffering, and inequality. These conversations about climate justice, or rather climate accountability, however, were not exclusive to globally southern nations.

During the highly anticipated opening of the United States Pavilion today, United States Special Presidential Envoy for Climate and former Secretary of State John Kerry, as well as, White House Deputy Chief of Staff John Podesta, reminded the world that while COP27 embodies commitments made by many collaborating nations, countries that have opted out of climate change action need to be motivated to contribute to the fight against global warming. Like in the African and Islander pavilions, discourse on climate accountability has left looming questions about how the world’s largest countries will respond to calls for climate equity. It is time that nations address these calls and put their money where their mouth is so that lives can be saved and commitments can be upheld. 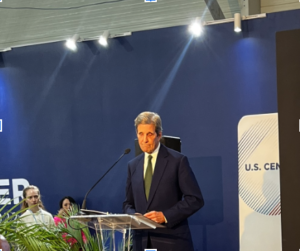 John Kerry speaking at the opening of the U.S. Center

After a brief interview with our youth delegate Emmet, Mr. Podesta stated the following, “The United States has an obligation to find a good outcome on loss and damage”. The Deputy Chief of Staff also remarked on the need to listen to the voices of “ countries that are contributing the least and getting hit the hardest” to “move forward with justice to a more sustainable future”.

With support from developed nations like America, there is great hope that funding and security for vulnerable communities will come from this conference. During the duration of COP27, the question will become focused on the implementation of climate accountability and how we can modify our financial systems to achieve sustainability goals worldwide.