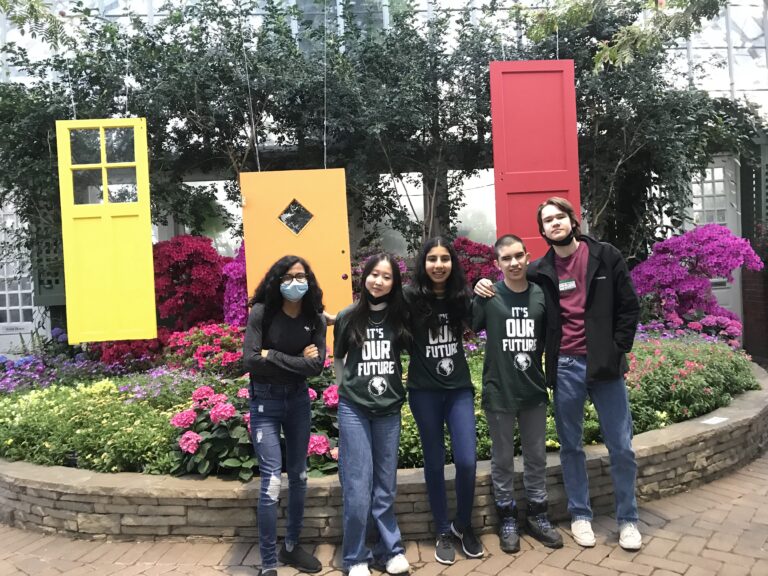 Drive less, support climate-conscious political candidates, and… sue the U.S. government? That’s exactly what the climate activists featured in the film YOUTH v GOV have done. The documentary film, directed by Christi Cooper, follows the story of 21 youth climate activists who sued the U.S. government for endangering their constitutional rights to life, liberty, and property by willfully and knowingly exacerbating the climate crisis over decades. On Wednesday, May 4th, youth from Seven Generations Ahead’s It’s Our Future program, as well as other students across Chicagoland, held a discussion with the film’s director and two of the plaintiffs and film subjects. The event was held in partnership with One Earth Film Festival, both virtually, and in-person at the Garfield Park Conservatory.

The panelists included plaintiffs Levi Draheim, age 15, and Isaac Vergun, 20, as well as Cooper, who is a PhD scientist and Emmy-award winning cinematographer, in addition to documentary filmmaker. The students hosting the panel included IOF student and Oak Park River Forest High School sophomore Manolo Avalos, as well as Danica Sun from the Illinois Math and Science Academy, and Tasha Bhatia of Hinsdale High School. Panelists took questions from the hosts and audience members.

On the question of what they learned from the journey of the lawsuit, the panelists were unanimous in one thing: how long it takes to get something done through the courts.

“How prolonged justice can be definitely struck me really hard,” said Vergun. And Draheim reiterated those sentiments, saying it was “just astonishing” how long it’s taking to see action on “something that’s so obviously a big problem,” – meaning the climate crisis.

While Cooper agreed, she also noted “how urgent the need is that our third branch of government step in and help to solve this problem. Because our other two branches haven’t done what’s needed. In fact, they’ve engaged in policies that have harmed the youth and will in the future.”

But, Cooper also reflected on how much the movement has grown since she started telling the stories of young plaintiffs 11 years ago. Draheim agreed with this. “It’s amazing that there are so many people out there that care about what I do and are so willing to take action,” he said.

Draheim has cared about the environment all his life, and has experienced firsthand the dangerous effects of a warming climate. He spent much of his life on a small barrier island off the coast of Florida, but recently moved to the mainland because of the increased risk of flooding. In his young life he has already lived through hurricanes, flooding and algal blooms, and channels his activism by attending and speaking at climate marches and rallies. Vergun credits a 5th grade science project with igniting his passion for climate activism. He once met Bill McKibben, and soon after began a campaign to get his hometown in Oregon to divest from fossil fuels. Now a student a Howard University, Vergun is studying journalism, with plans to write about the climate crisis.

Seven Generations Ahead’s director, Gary Cuneen, asked the panel what they’ve learned so far that has worked and what hasn’t. It gave the panel some pause, as they contemplated all the lessons of a years-long fight in the courts that still isn’t over. Ultimately, film director Christi Cooper answered that they have to keep coming back to the lesson that it’s about the long game and about paving the way.

“This case has made it further than most people, including a lot of legal scholars, ever thought it would,” said Cooper. “Even if this case doesn’t ultimately win, it has served as a foundation for a lot of other cases, and for young people as an inspiration.” Cooper explained that what they’re doing is akin to the civil rights legal strategies, and that often, it took numerous cases to go through the courts before one won. “If people had never taken these issues to court, we would have never secured those rights,” she said.

In his final message to the audience, Draheim summed up a valuable lesson for all the youth climate activists listening in. “Even if you don’t feel like you’re making a big difference, continue to keep fighting,” he said. “All the small differences that people make as individuals add up.

Events, IOFclimate crisis, It's Our Future