Why solar? Why now?

Since 1990, global surface temperatures have warmed at a rate of about 0.15°C per decade according to the Intergovernmental Panel on Climate Change (IPCC), within the range of model projections of about 0.10 to 0.35°C per decade. The U.S. is seeing more extreme weather, including flooding, droughts and wildfires, which cost taxpayers billions of dollars in damages. In 2016, there were fifteen extreme weather and climate events in the U.S. that caused $1 billion or more in damages. The annual average number of such events has risen in the last five years compared with the previous 35 years. Many recent disasters—including flooding caused by extreme storms and heavy downpours, droughts and wildfires—were exacerbated by climate change. With the reality of the federal government’s recent backsliding on environmental protection and climate change, it is even more imperative that states, local communities and businesses bring into reality a 21st century renewable energy economy.  To get involved, contact .

Making the most of FEJA

What is Community Solar?

Community Solar is an installation of solar panels that provide solar energy and financial benefits to voluntary subscribers. Subscribers can buy or lease a share of the community solar installation.  In exchange, they receive a credit applied to their electricity bill.

How can I get involved with a community solar project?

Use this tool from Energy Sage to find a project near you. 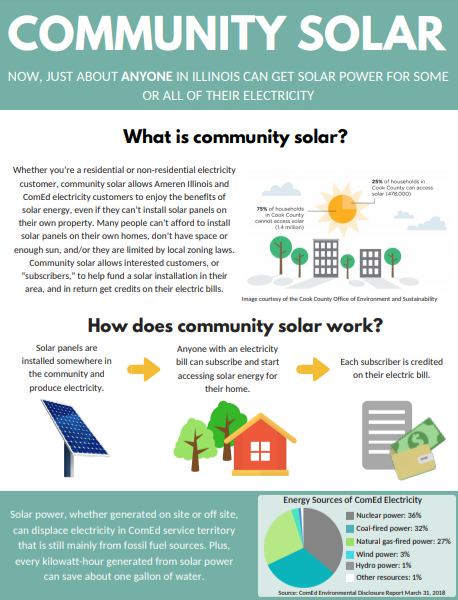