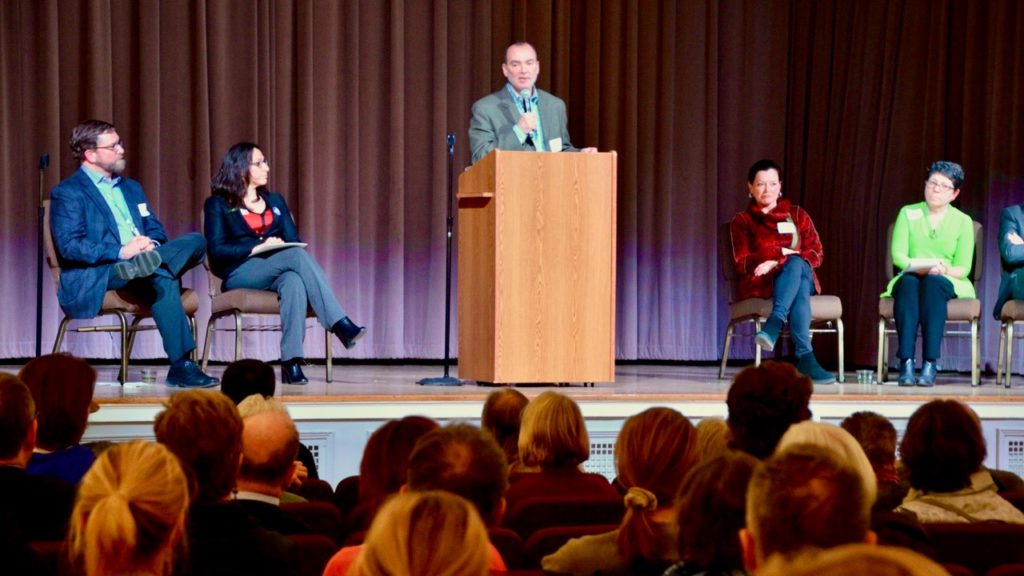 The Resilient Communities Forum on Jan. 31 at the 19th Century Club drew 175 residents from Oak Park and River Forest. They heard from municipal and environmental leaders on ways nations and communities are addressing the challenges of climate change.

PlanItGreen helped organize the event, which featured a presentation by SGA executive director Gary Cuneen on PIG’s priorities for the year.

Cathy Yen, executive director of the OPRF Chamber of Commerce, emceed the program that included Village of River Forest President Catherine Adduci and Oak Park Mayor Anan Abu-Taleb, who both participated in the North American Mayors’ Climate Summit in December. They shared their takeaways from the conference and its meaning for local communities.

He offered a hopeful message from his experiences at the conference. “From the village to the federal level, things are still happening [on the environmental front], so don’t be too discouraged by whatever news stories or tweets you might come across,” said Funk, associate Director of Land Use at the Center for Carbon Removal. “Things are still going forward.  We’re getting up every day to do this work.”

Aducci spoke on River Forest’s sustainability priorities. The village “is centering its environmental efforts toward to two important initiatives, both of which trustees and I have approved: the PlanItGreen Sustainability Plan and the Greenest Region Compact, sponsored by the Metropolitan Mayors Caucus.”

In brief remarks, Abu-Taleb focused on Oak Park’s energy future. “With the benefit of Oak Park’s growing energy aggregation fund, we can and should explore and develop a sizable solar project, one that could generate up to 15 percent of residential energy needs,” he said.

For the last seven years, both villages have participated in the PlanItGreen sustainability plan, which lays out goals in multiple areas. As the core team lead on the plan, Cuneen reviewed its 2018 priorities.

The team will continue to work with large institutions to get food scrap diversion systems up and running, he said, noting that “residential diversion rates still haven’t met PlanItGreen’s 50 percent diversion rate.” This year, PlanItGreen wants “community leaders to look at strategies that will help reach that goal,” he said.

The plan’s team is also working to get major institutions to voluntarily benchmark their energy use. PlanItGreen, Cuneen said, will “look at baseline data to set energy reduction goals and then connect institutions to organizations like Elevate Energy and some utility-based programs that are doing energy audits that are making recommendations for energy efficiency upgrades.”

PlanItGreen is the only two-community sustainability plan in the State of Illinois.

“We provided information on the cost-saving and environmental benefits of reducing waste in packed lunches,” Frank said. “Finally, we secured volunteers to oversee the lunch-sorting stations at the various schools, which will ensure our continued success.”

In addition to PlanItGreen, Green Community Connections, the River Forest Sustainability Commission and the Oak Park Environment and Energy Commission with support from CommunityWorks were organizers of the forum.  Other supporting groups included Interfaith Green Network, West Cook Wild Ones, Representatives of D97 Green Teams and Green4Good.