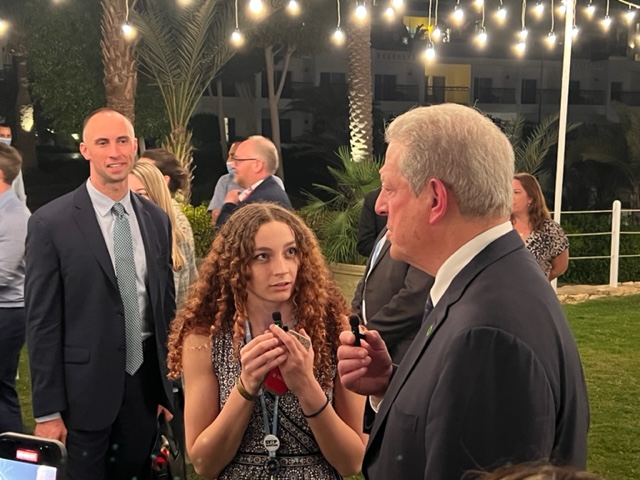 I attended a high-level session with the ministers and managers of various countries on ghg emissions tracking and reporting (European Union, African nations, Israel, Belize, etc.). The issue of making strong enough country commitments to stay within 1.5 degrees Celsius is one thing, and another is getting accurate data from a diverse array of countries, making sure that reporting is “apples to apples” and verifying the accuracy of reports. There are clear resource and capacity limits among developing nations in terms of technology, human resources and the ability of all nations to collect accurate data using the same methods and tracking the same data. This is critical to accountability and transparency and knowing that countries are on pace with ghg reduction commitments. Listening to the discussion, it is apparent that the task of getting everyone on the same page with the same technology, human resources, etc. is a daunting task, if not impossible.

Prior to this session I sat in on Al Gore’s session with UN Secretary General Antonio Guterres, in which the former U.S. Vice President outlined with visuals and words the impact of the crisis and a new project called Climate Trace. Climate Trace is a collaboration of multiple data tracking organizations that have come together to use the best technologies including satellite data and artificial intelligence to track ghg emissions at source and by sector and by country. Climate Trace has demonstrated its capacity to accurately track ghg emissions for 241 countries comprehensively and sectors including steel, rice, shipping, power plants, landfills, etc. The use of this technology could eliminate the limited resource issue of tracking and reporting and the accuracy and political issues related to relying on each individual country to submit its own data. In addition to country data, it has aggregated data on the top 50 ghg polluters in the U.S, China, Europe, etc. and the top 14 largest oil and gas field polluters global. Trace is beginning to experiment with sub-regional and city data as well.

I posed the question to the Tracking and Reporting moderator as to whether – given the issues related to inequities in capacity and data collection – the group had considered using Trace as its reporting mechanism for COP. To my surprise after asking the panel the question of committee members and after speaking with the EU minister, he admitted that he was not familiar with Trace in detail but was aware that new technology developments and it was clear that the committee was unaware as well. When I mentioned this briefly to Al Gore in a chance conversation at a reception later that night hosted by his Climate Reality Project, he indicated that he will be pushing for COP to adopt Trace. This technology in my opinion would represent a major breakthrough in accuracy, verification and reporting and would enable COP and individual countries to have real time data annually on progress against Nationally Determined Contributions (NDCs-ghg emissions reduction goals). Stay tuned.

In the face of 128.5 degree F record breaking temps in Iran, 1.3 million people displaced in Nigeria last week due to flooding, the country of Chad decimated by similar flooding, 450 people recently killed in South Africa due to “rain bombs”, the flooding that impacted 10-12% of Pakistan costing billions of dollars, the first hurricane landing in November in Florida today and the fact that 162 million tons of carbon are produced every day which is equal to 600,000 Hiroshima bombs exploding daily…Special U.S. Climate Envoy John Kerry went on a strong rant yesterday about the scale of climate financing, stating that the conversation around climate change has been at the scale of millions and billions and that what is needed is over $1 trillion per year between now and 2030 to stay with 1.5 degrees Celsius. Kerry’s uncharacteristic tongue lashing of the discourse came a few hours after sessions I sat in with OPEC and the Arab Coordination Group’s announcement of a $24 billion pledge over the next years and the World Bank’s statement that it is committing $32 million for adaptation and launching its SCALE project that will increase funding for projects that can demonstrate ghg emissions reductions. Kerry also stated in the session that all of the governments combined do not remotely have the capital needed to stay with 1.5 degrees Celsius, and that the whole paradigm of funding must change and shift to the private sector. Today, in negotiations around the Green Climate Fund to support adaptation projects in developing countries ($10.3 billion of $100 billion has been raised), country parties pushed for the streamlining of application processes, capacity building for countries to make applications (including using funds to support government positions rather than pay outside consultants), work plans supporting technical assistance to developing countries, and the acceleration of project approvals.

Please check the youth posts, as they have had face to face meetings and have conducted interviews with both John Kerry and Al Gore and a host of other people from across the globe! Last night they produced a live forum called “From the Mideast to the Midwest”, during which they highlighted their experiences at COP27 and learnings about the issues being discussed here in Sharm El-Sheikh, Egypt.