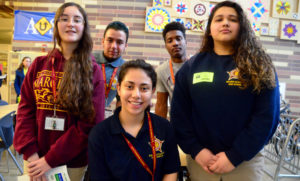 Solorio’s Zero Waste Ambassadors are tireless when it comes to leading zero waste work in schools and the community. Visitors got to see zero waste lunchrooms in action and hear Ambassadors explain why they are inspired to work on this and what they do to make it work. Their passion was clearly visible as they described how the program not only changed the way they look at school waste and the environment but also how they make it their mission to change minds and habits in their community through programs including the City’s Blue Cart Recycling Program.

Victor, one of the Solorio Ambassadors, said, “At my elementary school, we didn’t do this. The fact that we’re sharing this experience is amazing. We didn’t do anything at home before this either– no recycling, nothing. You’d be surprised; a lot of kids do care. Some might do it at first as a service learning project, but once they see the impact they want to be on the Zero Waste Team. I joined last year, now I’m a supervisor of other students. Once incoming freshmen see it, they will want to be part of it. We don’t have to do that much– it’s simple to do. So one thing we want is for other schools to do it too.”

Solorio, located in the Gage Park neighborhood, is one of 14 Chicago Public Schools (CPS) participating in the CPS Commercial Composting Program, which is implemented by SGA in partnership with CPS. Since starting the program in January 2016, Solorio Zero Waste Ambassadors have run and monitored the zero waste operations in their school cafeterias, resulting in an amazing 85% reduction in cafeteria waste from landfills. They accomplish this through food recovery, recycling, and composting, along with a determination to change the culture in their school as it relates to environmental sustainability.

In December 2016 and January 2017, they took their message to their neighboring schools Sandoval and Hernandez, educating students and teachers as they were about to start their own zero waste lunchrooms. Both schools are now diverting 89% of their lunchroom materials from landfills.

The February tour also allowed visitors see first-hand how the commercial composting program is being implemented and integrated into each of these schools, operationally and through STEM education. In addition to City of Chicago representatives and members of the mayor’s staff, Mary Houpt from Peoples Gas attended the tour. Peoples Gas has funded the commercial composting program from its start a few years ago. 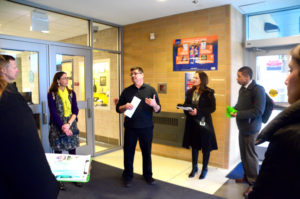